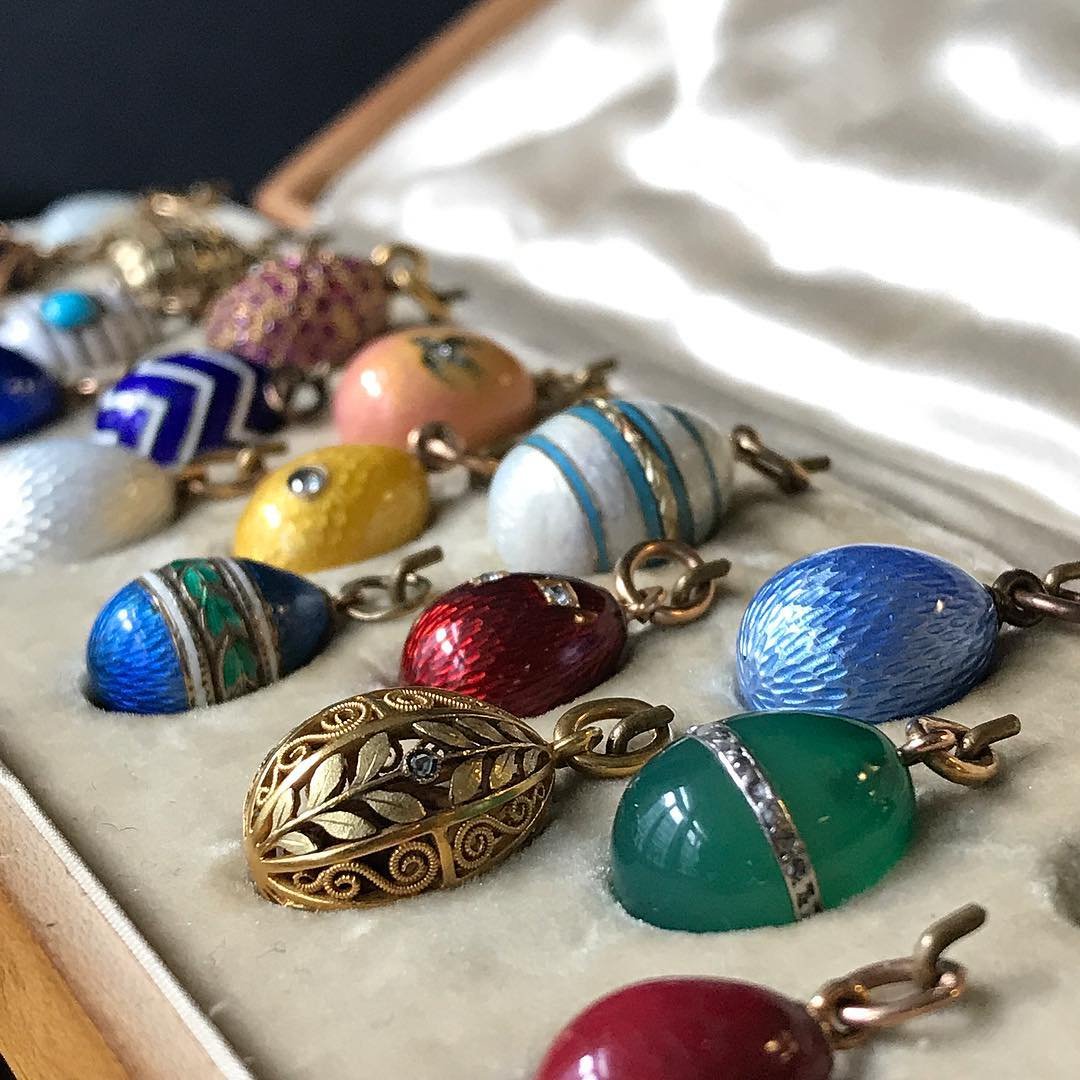 The Imperial Fabergé eggs are among the most glorious works of art ever created. The work of Carl Fabergé, the eggs were made between 1885 and 1917 for the Imperial Russian family for whom he was the appointed jeweler. The House of Fabergé made many stunning pieces of jewelry but it is the Imperial Easter Eggs, significant for their exquisite materials and perfectly executed tooling that has the collecting world lusting after them. And lust they must, because there were only 52 made, of which 43 have survived. There are thousands of facsimiles but nothing will ever live up to the original Fabergé Eggs - the highest price paid to date for a genuine, original is $18.5million!

Considered the most beautiful of the Fabergé Eggs. The egg is made from rock crystal, platinum, diamonds and moonstone. Every Fabergé Egg contains a "surprise" sometimes visible, sometimes hidden until the egg is opened. In this case, the surprise is a miniature basket of flowers made from platinum, gold, white quartz, jade and green garnets. The Winter Egg was made in 1913 and is currently owned by the State of Qatar.

This is the largest of the Fabergé Imperial Eggs and was presented by Tsar Nicholas to Tsarina Alexandra as his Easter gift in 1906. Made of gold, silver, onyx, and enamel and representing the Uspensky Cathedral, where the tsars of Russia were crowned, it features tiny working clocks (12mm) and plays two of the tsar’s favorite Easter hymns.

Made from stunning dark blue translucent enamel and set with rose cut diamonds, the egg features the monograms of MF (Maria Feodorovna) and AIII (Alexander III) and was presented in 1895 to Maria in commemoration of Alexander's death. Now owned by the Hillwood Museum in Washington.

Made in 1912 from lapis lazuli, gold, and diamonds, the egg denotes the Louis XV style. The surprise is a platinum framed watercolor miniature. It is now on display in the Museum of Fine Arts, Richmond, USA.

Made from rock crystal, gold, Siberian emeralds, and rose-cut diamonds, the egg was gifted by Tsar Nicholas to Alexandra Feodorovna in 1896. The miniatures are exquisite paintings of places significant to the Imperial Family. It is now owned by the Virginia Museum of Fine Arts in Richmond.

Another gift from the Tsar to his wife (in 1898) this egg is rose pink and green enamel, gold and pearls. The miniatures of the Tsar and two of his children are painted on ivory. The egg is currently the property of the Link of the Times Foundation in Russia.

The 1900 egg is made from varicolored gold, enamels, diamond, rubies, and pearls. A crowing cockerel made from gold and feathers rises out of the egg. It is now the property of the Link of the Times Foundation in Russia.

Also known as the Spinach Jade Egg, this was the Tsar’s gift in 1899. It is made from nephrite (a form of jade), silver gilt, diamonds, and enamel. The heart “surprise” is made from exquisitely colored enamels rose-cut diamonds, pearls and mother of pearl. The Pansy Egg is currently the property of a private collector.

Also known as the Bouquet of Lillies Clock, the Tsarina received this as a gift in 1899. Made from varicolored gold, platinum, onyx, rose-cut diamonds and enamel, it is now owned by the Kremlin Armory Museum, Moscow.

Presented by Nicholas II to Dowager Empress Maria Feodorovna in 1901. It's made from quatre-couleur, translucent enamels, diamonds and seed pearls. It opens to reveal a quatre-couleur gold miniature of the Gatchina Palace in a velvet lining. Now owned by the Walters Art Gallery, Baltimore, USA.

One of the Imperial Fabergé Eggs given by Tsar Nicholas II to his mother, Dowager Empress Maria Feodorovna. Just 10 cms high, it is made from gold, enamel, and diamonds. The surprise is a silver-plated gold swan sitting on a miniature lake made from an aquamarine. When wound up the swan’s wings spread. Owned by the Fondation Edoaurd et Maurice Sandoz, Lausanne, Switzerland.

This was the Tsar's present to his Tsarina in 1898. It is crafted from red gold, diamonds, pearls, and enamel with eight painted miniatures on ivory. The current owner is the Virginia Museum of Fine Arts, Richmond, USA.

Made from green gold, platinum, diamonds, and rubies, this egg was made in 1902 and was another of the Tsar’s gifts to his wife. The surprise has been lost but it is known to have been a 4-leafed clover set with diamonds and miniature portraits of the Tsar’s four daughters. The egg is owned by the Kremlin Armory Museum in Moscow, Russia.

Like a number of the Fabergé Eggs, it is set with paintings of the Imperial Family. The 1911 egg is made from gold, enamel, diamonds, and rock crystal with the 16 portraits being on ivory panels. It is owned by the Link of the Times Foundation in Russia.

Presented by Nicholas II to Dowager Empress Maria Feodorovna in 1910. It is made from rock crystal, gold, and diamonds. The statue is fashioned from green gold, lapis lazuli and rose-cut diamonds. It is the property of the Kremlin Armory Museum in Moscow, Russia.

The 1907 egg is also known as the Cradle of Garlands Egg and was presented by the Tsar to his mother. It is made from gold, enamel, diamond, rubies, and pearls and has a velvet lining. The now missing surprise was made of white enamel, ruby, pearls, and rose-cut diamonds, with watercolors of the Imperial children. Mr. Robert M. Lee of the USA is the current owner.

17. The Catherine the Great Egg

The 1914 egg is also known as the Grisaille Egg or the Pink Cameo Egg. It is made from quatre-couleur gold, pink grisaille, enamel, diamonds, and seed pearls. Before being lost, a mechanical sedan chair made from gold, enamel, and diamonds sat on a velvet lining. It is part of the Marjorie Meriwether Post Collection on display in the Hillwood Museum, Washington DC, USA.

Presented to Empress Alexandra by Tsar Nicholas II in 1915, it’s made from silver, gold, and enamel. The surprise is made from mother of pearl with watercolors on ivory. The portraits are the Tsarina, the Tsar’s sister, two daughters, and a cousin. It was made in 1915 and commemorates the service of Maria Feodorovna to the Russian Red Cross. It is in the Lillian Pratt Collection at the Virginia Museum of Fine Arts, Richmond, USA.

Presented by Nicholas II to Tsarina Alexandra Feodorovna. The 1907 egg is made from gold, enamel, and diamonds. It has a silk lining which used to hold an oval diamond chain and locket set with watercolors. The egg is the property of the Walters Art Gallery, Baltimore, USA.

Hand-painted with portraits of the five royal children of Tsar Nicholas II of Russia and Tsarina Alexandra, the 1908 egg is made from nephrite, gold, diamonds, and rubies. The portraits are on ivory. The surprise is a gold miniature of the Alexander Palace. It is owned by and on display in the Kremlin Armory Museum in Moscow, Russia.

The Bay Tree Egg from 1911 is made of gold, green & white enamel, nephrite, diamonds, rubies, amethysts, citrines, pearls, and white onyx. The surprise is a tiny feathered songbird which rises out of the top of the tree when a hidden lever is depressed. The bird sings, flaps its wings and sings. It is now the property of the Link of the Times Foundation in Russia.

Made in 1913 for Tsar Nicholas II as a present to his wife, the egg celebrates the three hundred years of rule of Russia by the Romanov Dynasty. It is made from gold, silver, diamonds, turquoise, rock crystal, purpurine, enamels and watercolors on ivory. The surprise is a miniature globe made from steel, varicolored gold and enamel. It currently stands in the Kremlin Armory Museum in Moscow, Russia.

This stunner is one of four Fabergé Eggs in the royal collection of Queen Elizabeth II (Prince Philip is a direct descendant of the Romanovs and there are family connections on the Queen’s side too). It is one where the surprise (7.9cm) is only just a bit smaller than the egg (9cm) itself. The shell is made from yellow gold, platinum, enamel and mosaic tiles of diamond, emerald, topaz, sapphire, garnet, pearl, and moonstone. The surprise is a miniature of the five Romanov children set on a pedestal made from gold, enamel, pearls, garnets, and diamonds

Gifted by the Tsar to the Dowager Empress (his Mom), the 1916 egg is made from silver, gold, enamel and watercolor portraits on ivory The surprise is a hidden portrait of Tsarevich Alexai Nikolaievich, the heir who never made it to the throne because of the Russian Revolution. This is the last egg the Dowager received and is the only one of the Fabergé Eggs to have left Russia with its original owner. It is now owned by the Link of the Times Foundation in Russia.

Made in 1893 from yellow and varicolored gold, silver, platinum, enamel, diamonds, pearl, ivory, and rock crystal. It commemorates the imperial hunting lodge in Abastumani. Four pearled doors open to reveal watercolor miniatures on ivory. The surprise is lost and it is one of only two Fabergé Eggs to use red because the family associated the color with the Tsarevich’s hemophilia. It is currently in the collection of the Matilda Geddings Grey Foundation.

One of the early and simplest eggs by Fabergé, it is made from gold, jadeite, diamonds, and silver. The satin lining originally held a since lost miniature elephant crafted from ivory, gold, enamel, and diamonds. The elephant was the first automaton produced in the Fabergé workshops. The egg originally sat on a base supported by three cherubs which has also been lost. The Diamond Trellis Egg is now in the McFerrin Collection, Houston, USA.

Made in 1897, the egg is fashioned from gold, enamel, and diamonds lined with white velvet. The accompanying miniature coach is made from gold, platinum, enamel, diamond, rubies and rock crystal. Other surprises that are now missing were a pendant, display case and stand. The owner of the egg today is the Link of the Times Foundation, Russia.

28. The Basket of Wild Flowers Egg

The 1907 Flower Basket Egg is made from silver, parcel gilt, enamel, and diamonds. Little is known about the surprise but the original paperwork describes pearls among the materials used and there are no pearls on the egg itself. This is another in the ownership of Queen Elizabeth II.

This was the first egg presented by Nicholas II to his wife, Alexandra Feodorovna, in 1895. It is made from varicolored gold, enamel, and diamonds. The cream velvet lining holds a yellow enamel rosebud. The bud originally contained two surprises: a miniature crown made from gold, diamonds and rubies and a pendant containing a cabochon ruby. The egg is another in the ownership of the Link of the Times Foundation in Russia.

Stunning aren’t they? Which one do you like most?